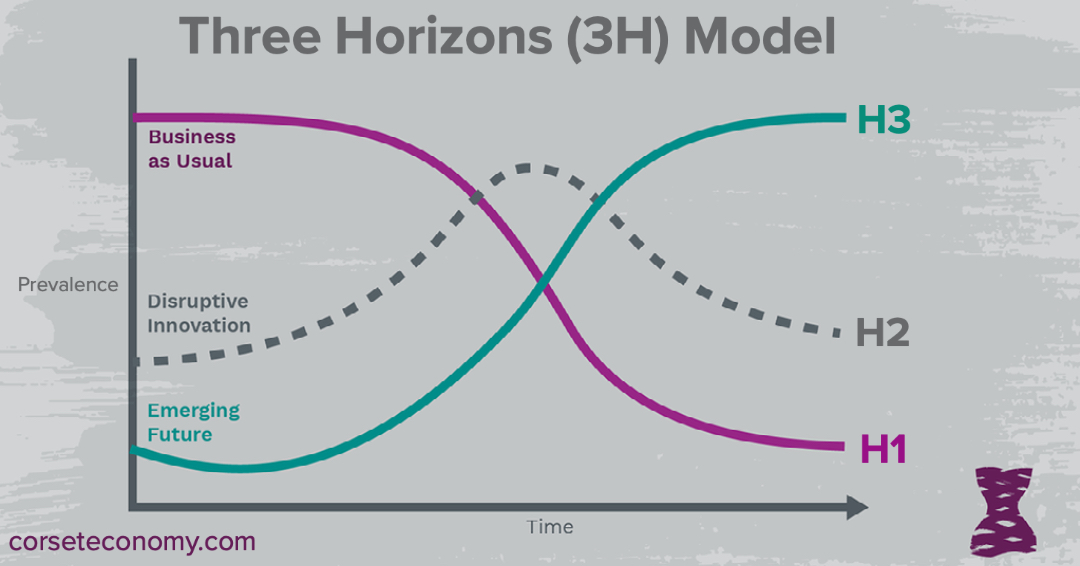 Last month we held our Community Call on the Three Horizons model, 3H. This week is the time when world leaders arrive in Glasgow for the United Nations 26th Climate Change Conference, something that affects each and every one of us, directly or indirectly. Climate change, together with all its ecological implications represents an existential threat to our planet and the world as we know it. In August, the UN Secretary-General António Guterres referred to an Intergovernmental Panel on Climate Change (IPCC) report as a ‘code red for humanity’[1]. So what do these things have in common?

One concept that has gained traction over the past years is Doughnut Economics, a theory about the economy by Kate Raworth[2]. Raworth articulates the need for humanity to live in the ‘doughnut’ between two boundaries. We need to not surpass our environmental planetary boundaries (of which climate change is just one alongside biodiversity loss, ocean acidification and others) or risk reaching the tipping points of the Earth’s life supporting systems. We must also ensure we meet the minimum of the social boundaries, identified as the UN Sustainable Development Goals. The key for both environmental and social sustainability is to operate within the doughnut. If you’re interested in learning more, here’s a great video from Kate Raworth and Wired.

Remaining within the donut will require major changes to the economy. Kate Raworth has used the 3H model as a way to explore possible transformations of the economy and aspirations about how to move from business as usual H1, to an emerging vision of the future H3, – take a look at Three Horizons Framework – a quick introduction.

For most of us, these issues are too abstract. Our interest is in finding tools and methodologies that are useful for the world that affects us, our lives and careers. We believe that our colleague, Bill Sharpe’s Three Horizon’s model can be useful here too. Is your worldview or career rooted in H1? If yes, will it remain fit for the future? Probably not. Is your worldview or career rooted in H3? If yes, how do you earn an income that enables you to thrive in today’s world? Or are you trying to find your way in H2, the entrepreneurial zone? This is the ‘arena of disruptive innovation’, new ways of doing, being and organising our economy. But what makes H2 so interesting is that, due to its disruptive nature, there are two versions—H2 minus (H2-) and H2 plus (H2+). H2- occurs when the disruptive innovations are captured by H1’s business as usual, as a way of extracting greater value at the cost of the environment and wider society. H2+ occurs when the disruptive innovations try to move to a different H3 paradigm, one that is regenerative and distributive.

Our community call last month explored the Three Horizons model using the example of money, something that directly affects all of us. We explored how the world had moved from a cash-on-delivery model to an online model of payment upfront, and how this had implications for cashflow for many small businesses. Looking at companies like Amazon, this mountain of free cashflow enables them to create razor-thin profits that no other companies can match – and also puts the onus of carrying inventory costs on others. We talked about Central bank digital currencies (CBDCs), the H2- innovations and the SurveilState Online cash registers (OCRs) that Russia for one has adopted. We touched on the global stable coins (GSCs), such as Applepay, pulling towards a Technocracy future. We talked also about local currencies and cryptocurrencies, with some interesting examples from Luxembourg – could these pull towards a ReMaker future? We then turned to Informal, touching on the various ways in which people have used different tokens as ways of barter.

All these futures could emerge in the near term, so it is worth thinking about how they might impact you, your career and your business, either directly or indirectly. Similarly climate change. As we can see at COP26, the climate change debate is gaining traction, but it is a divisive issue. Governments are being challenged to produce results, not just talk. The question is whether we’re now in H2- or H2+ which will ultimately define our future. Whether you are looking at the environment, money or your industry of work, it is worthwhile to consider the three horizons – which one are you in, and which do you want to push towards? We know when it comes to the environment we’re with Kate Raworth…