Trendwatch: how predictable is that trend? 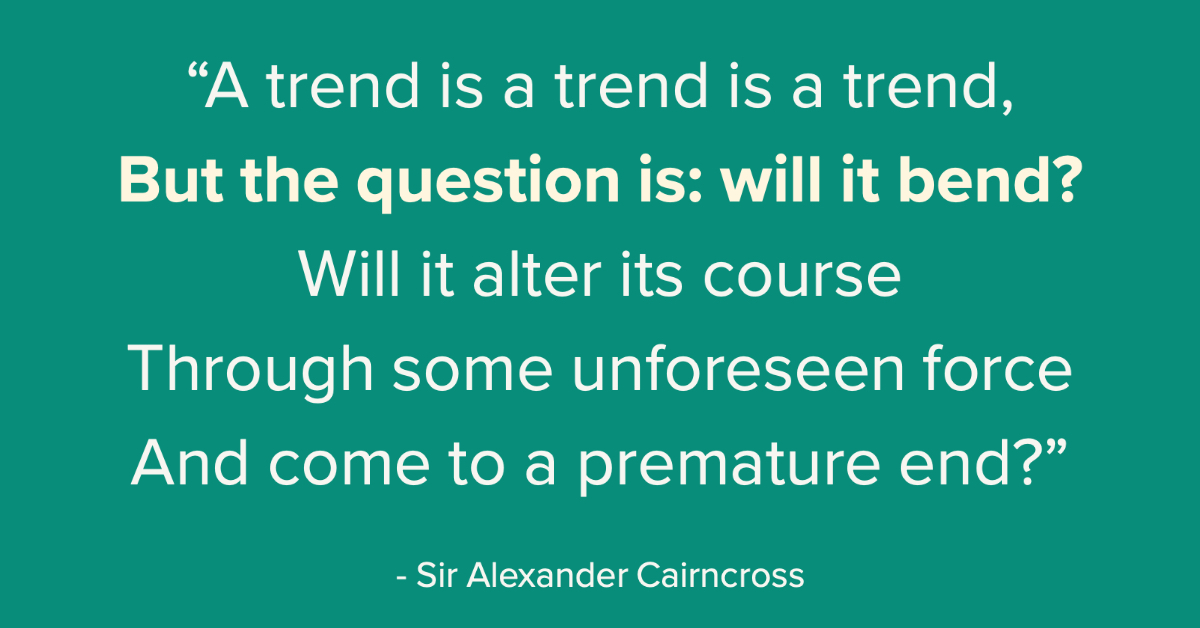 Trends take many forms. Some trends can be predicted, while others are fundamentally uncertain. However, it takes a lot of questioning to accurately determine whether a trend is predictable, or not.

One of the leading thinkers on this was Pierre Wack, head of Shell’s Group Planning, and one of the great innovators of scenario practice. His practice was to first identify those trends that were predictable, and described this process of working out whether or not a trend was ‘predetermined’ as follows:

“From source to mouth, the Ganges is an extraordinary river in India, some fifteen hundred miles long. If you notice extraordinarily heavy monsoon rains at the upper part of the basin, you can anticipate with certainty that within two days something extraordinary is going to happen at Rishikesh, at the foothills of the Himalayas.” And three days later at Allahabad, south of Delhi; five days after that, in Benares, at the river’s delta.1 “Now, the people down here in Benares don’t know that this flood is on its way, but I do. Because I’ve been at the spring where it comes from. I’ve seen it! This is not fortune-telling. This is not crystal-ball gazing. This is merely describing future implications of something that has already happened.” 2

It is not always easy to identify levels of predictability, and sometimes when one looks more widely, or looks at a trend from another angle, it no longer seems as predictable as it once did. The classic example of predetermined trends has always been demographic trends, the number of people living on our planet. Having recently worked with UNFPA, we learned that these figures are not cast in stone. At the turn of the 20th century the global population was 1.65 billion, but by 1999 it had reached 6 billion, and today it stands at about 7.6 billion.3

The United Nations has been regularly readjusting its population projections, of which there are three variants: high, medium and low.4 The medium variant suggests that there will be 11.2 billion people on the planet by the end of the century. If fertility rates drop, the global population could fall to 7.3 billion, but if the high variant prevails there could be 16.5 billion on the planet.

So, keep your eyes peeled for trends. Chances are, you won’t necessarily find predictable ones, but identifying the unpredictable ones is becoming ever more important. As Sir Alexander Cairncross, famous economist and advisor to the UK Treasury, asked his audience of economists half a century ago: “A trend is a trend is a trend, but the question is: will it bend? 5

Here, we’re interested in what might make the trend bend in a Corset Economy! That means when and if the trends that matter to you might bend, and what circumstances might cause them to do so. To really be future ready, understanding trend-bending is a critical competence, and a skill well worth developing. What are the trends worth thinking about? More importantly, are they likely to bend, and if so, in what directions might this happen? If you are aware of this question, you will also be more aware of early signs of change, and therefore more flexible and adaptable when the time comes.